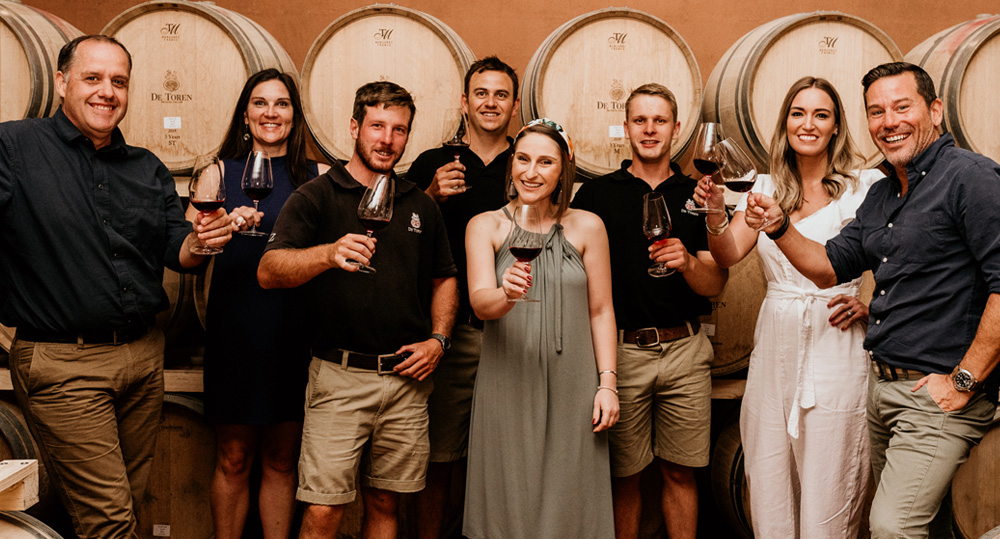 ‘THE TRUTH IS IN THE VINE’; just six simple words etched onto the walls of De Toren Private Cellar’s underground tasting room and vinoteque. And yet they neatly encapsulate the estate’s guiding philosophy, an approach that has – in little more than 20 years – elevated this boutique Stellenbosch cellar into one of South Africa’s most respected premium wine producers. With an unwavering focus on crafting superlative Bordeaux style blends, the wines of De Toren have become coveted worldwide, raising the profile of high-end South African wines across the globe.

De Toren began with a view. Enchanted by the farm’s panoramic vistas stretching from the Helderberg, over False Bay and across to Table Mountain, the founder and his wife, first bought the property in 1991, a home in the winelands “to start afresh”.

However, their shared passion for wine soon took hold and it wasn’t long before they became tempted by the prospect of producing premium wine from the farm, they called home.

Recognising the untapped potential of this unique site on the flanks of the Polkadraai Hills, an additional 17 hectares of vineyard to the west, laying the foundation for De Toren’s innovative ‘Left Bank’ and ‘Right Bank’ approach to crafting world-class Bordeaux-style wines, was soon acquired. Over the next 20 years, the Cabernet-dominated De Toren Fusion V and Merlot-driven De Toren Z continually raise the bar for Bordeaux-style blends from South Africa.

Although parts of the farm were initially planted to Chardonnay, “we knew this area was ideal for Bordeaux cultivars,” explains Managing Partner, Albie Koch who has been with De Toren since day one. Working closely with academics from Stellenbosch University, the team embarked on an extensive soil analysis of the property. A dozen sampling holes were dug on each hectare of the farm, treble the wine industry’s standard practice. Across the farm’s 25 hectares, 15 separate soil types were identified. Complementary rootstocks were then matched to individual soil types, and 25 clones across the five classic Bordeaux varieties were planted.

These were vineyards designed from the ground up to produce world-class wines, and enormous attention was given to how each vineyard was planted. Imported plastic-wire trellising was used to minimise damage from the buffeting of summer winds, while the judicious use of drip irrigation is dictated by cutting-edge leaf-pressure testing. Aerial near-infra-red photography is used to map the vineyards; ensuring individual rows are grown, harvested and vinified to the height of their potential.

Planting density varies within vineyard blocks to ensure optimal stress for each vine, while conventional wisdom surrounding row direction was turned on its head.

“Farmers are always taught that vineyards should be planted north-south or east-west. We looked at the summer weather patterns on the farm and realised that the dominant wind direction is from the south-west,” explains Koch. “By aligning the vineyard rows to the prevailing wind off False Bay, it blows cooler sea air through the vineyards, instead of against it. That lowers the temperature, gives us a longer ripening period, and keeps our vines free of disease.”

With an eye on sustainability the viticultural team has also embraced organic practices in the vineyards, and all De Toren wines will be certified organic from the 2020 vintage.

“We want to farm with nature, not against it,” explains Cellar Master, Charles Williams. “That means being vigilant and proactive in the vineyards throughout the year, but it’s well worth the effort. We can already see how the natural balance is returning to the vineyards.”

With a maximum yield of just five tons per hectare no expense has been spared in producing superlative grapes, and that dedication to quality extends into the De Toren cellar.

Grapes are hand-harvested exclusively in the cool of the early morning, for a mere 2 – 3 hours maximum every day before successive rounds of hand sorting ensures only the finest unblemished berries make it into the cellar.

“We like to molly-coddle our grapes in the cellar,” chuckles Williams, explaining that De Toren – named for the tower reaching skywards from the cellar roof – was the first 100-percent gravity-fed cellar in South Africa. “The whole cellar was designed around our desire to treat the grapes softly the whole way through the winemaking process. If you respect the quality of the fruit, the fruit will respect you in the bottle.”

In the cellar, the juice is vinified in smaller, wider tanks, specially designed for De Toren, to allow for a greater ratio of skin contact. For barrel ageing, individual vineyard blocks are carefully matched to specific French coopers and once in barrel – a mix of first-, second- and third-fill oak – the wines lie undisturbed for a full 12 months.

“We taste each batch every month, and during tasting the winemaker will begin formulating an idea of the final vintage blends,” says Koch.

Those sample blends are taken around the world, showcased in blind tastings to select customers and members of the wine trade for feedback.

But the final blend is not about percentages, adds Williams: “The aim is to ensure De Toren Z and De Toren Fusion V are always true to their character, and the character of the vineyard.”

The first wine to make a name for De Toren was the De Toren Fusion V, first released in 1999. Picked from the slightly warmer west-facing vineyards on the property, it’s a ‘Left Bank’ wine dominated by Cabernet Sauvignon yet supported by the classic Bordeaux companions of Cabernet Franc, Merlot, Petit Verdot and Malbec. Blended harmoniously together, it’s a seamless ‘fusion’ of the five classic varieties of Bordeaux that is consistently scored highly by international wine critics and also the first SA wine to score 90+ points for its maiden vintage.

Inspired by the world-renowned wines of the famed ‘Right Bank’ of Bordeaux’s Garonne River, the maiden vintage of De Toren Z followed in 2004. With exactly the same quality, meticulous attention to detail and winemaking philosophy in mind as with De Toren Fusion V, the idea of De Toren Z was born, to complement the Fusion V, a Left-Bank Bordeaux styled wine. Crafted from ocean-facing vineyards, where the vines are cooled by summer sea breezes, its name is a tribute to Zephyrus, Greek God of the Westerly Wind. Dominated by Merlot, the ‘Zee’ contains all five of the classic Bordeaux varieties, delivering perfume, sophistication and power. Characteristics which De Toren Z is so well known for, continually securing it international acclaim.

“With upfront fruit, freshness and elegance, these wines have one foot in the Old World and one foot in South Africa,” adds Koch. “We perfectly represent that balance of the two styles.”

“The De Toren Z and De Toren Fusion V have the power that winemakers in Bordeaux would love to achieve, but with the same elegance and panache,” adds Williams.

The latest addition to the De Toren range is the De Toren Délicate, offering wine-lovers a unique perspective on Bordeaux. This refreshing Malbec-dominated wine is a light style red blend of Malbec, Cabernet Sauvignon, Merlot and Cabernet Franc, and is the perfect balance of upfront fruit and gentle tannins. Best served chilled, it’s ideal for a South African summer’s day.

From the outset De Toren’s focus has been on the cultivars native to Bordeaux, but in 2008 the winemaking team set themselves a challenge: with no restrictions on viticulture, cellar practice or costs, and with the singular goal of quality, how would they craft the best wine in the world? How could De Toren be of help establishing SA as a premium wine producing country.

It was a hypothetical exercise that found expression in a pair of remarkable limited-release wines, bottled under the apt label of Expression Unique.

An extension of the ‘extreme viticulture’ that has contributed to the ongoing success of De Toren Fusion V and De Toren Z, the release of Book XVII and The Black Lion further raised the bar for premium wines in South Africa.

Book XVII was a logical evolution of De Toren’s acclaimed Bordeaux blends, an expression of meticulous winemaking and extreme viticulture. Often compared to the famed ‘super-Tuscans’ it’s a wine silky smooth yet powerful, and a worthy addition to any connoisseur’s cellar.

As complementary as it is a contrast, The Black Lion was the De Toren team’s first official foray beyond the boundaries of Bordeaux. Far from expressing a regional style, this 100% Shiraz sets the benchmark for the cultivar. Grapes for The Black Lion are sourced from the Swartland (for structure), Stellenbosch (fruit and freshness) and the Helderberg (finesse), with the combination of terroirs adding immense complexity to the wine. In the bottle, the whole is far greater than the sum of its parts.

Both Book XVII and The Black Lion are hand-crafted in a separate cellar-within-a-cellar at De Toren, and are presented in striking bespoke packaging. Little wonder they have been hailed worldwide as two of the finest ultra-premium wines to emerge from South Africa.

“These wines are about meticulous viticulture and doing the utmost for perfection in the cellar,” says Koch. “They are showcase wines, to show the world what South Africa is capable of producing.”

It’s an objective that has guided De Toren from the outset. From pioneering cellar techniques to redefining the boundaries of extreme viticulture, the wines of De Toren Private Cellar are marked by devotion to quality, and ensuring the truth of the vine is told. Always.

Following the retirement of founder, Emil den Dulk, the new majority ownership of De Toren was announced in 2019. The deal that was agreed on will see this acclaimed wine producer being injected with newfound passion and energy.

De Toren South Africa will be operated by a newly formed Swiss company called De Toren Holding AG. Cedric Schweri will be Acting Chairman of this holding entity, while Daniel Mueller will operate as its CEO alongside Albie Koch, who remains as Managing Partner of De Toren Private Cellar.

“The new shareholders picking up the baton are set to uphold De Toren’s unfailing commitment to quality and meticulous winemaking that has firmly established it on the world’s wine map,” says Albie Koch.

In Daniel’s words: “We’re inheriting an award-winning brand with a stellar Bordeaux-styled portfolio that has captivated palates around the globe. Upholding the high standards that our predecessors have set is a task we take to heart. We are committed to continuing the legacy of De Toren, expanding the vision and taking the story even further.” 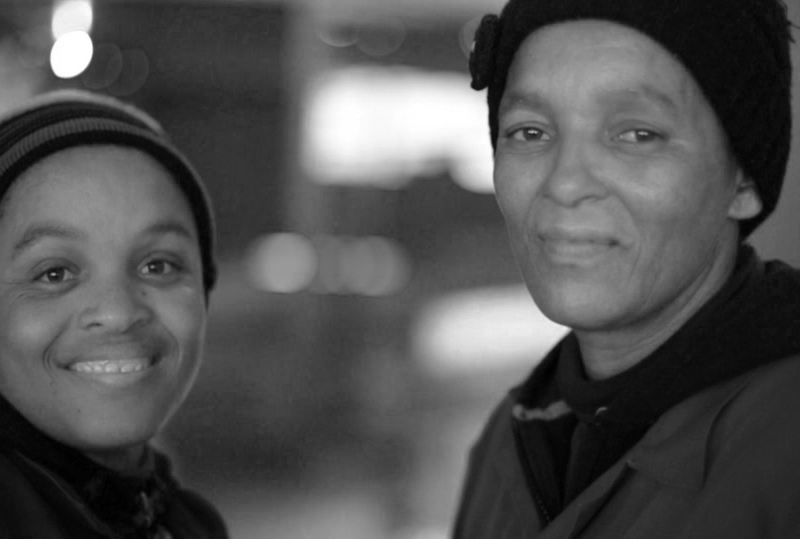 The Face Behind the Case… 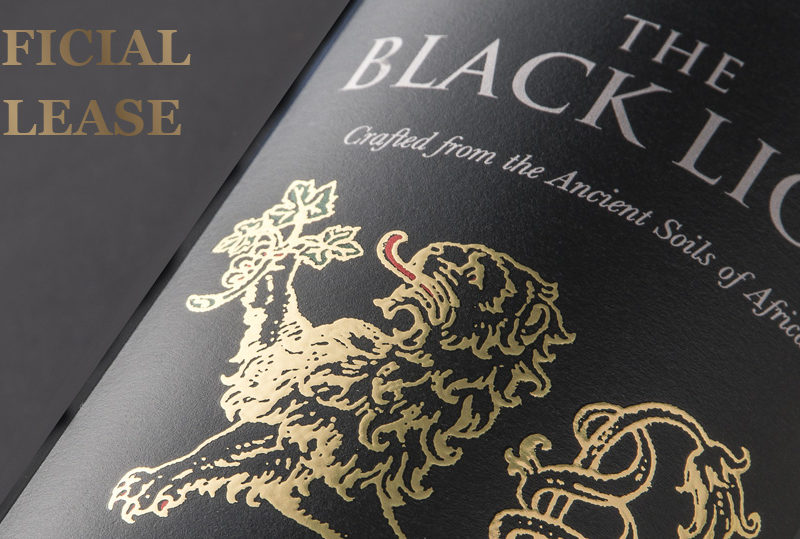 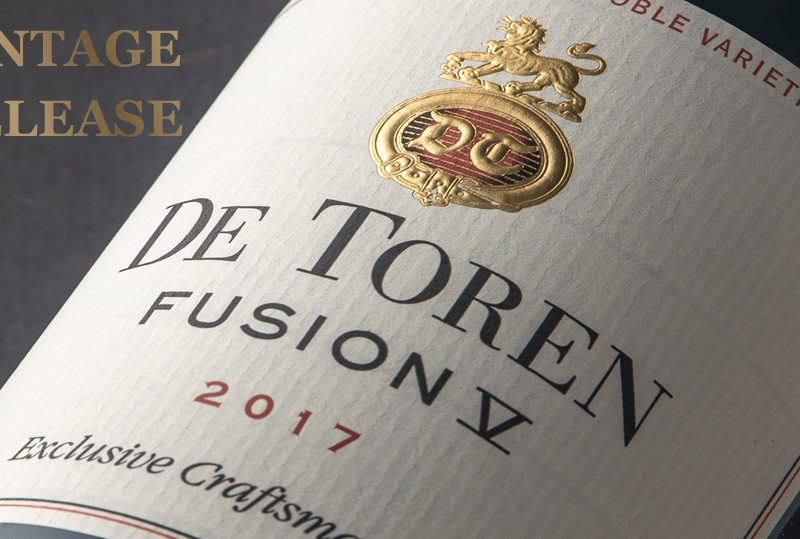